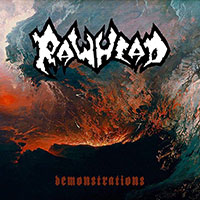 It will be a re-release of fascinating thrash metal from the early nineties! Rawhead, formed in 1990 near Seattle, were pushing a powerful  fast aggressive metal style at a time when a flood of musicians and media descended into the Northwest hypnotized by the “grunge sound.”.

These contemporaries of “Forced Entry” (Combat Records), “Bitter End” and “Panic” (both Metal Blade), which they all quite often played with, will offer you all three of their demos (recorded from 1991 to 1994 - the last one was never officially released) on one CD. The songs are arranged in a track order that packs a punch. It’s proof that they had and still have a lot to offer to thrash lunatics and die-hard metal fans. From the speed pounding of “Something Crushes Spine” to the rapid-fire power of “Bones of all Men” to the psychotic gloom of “The Last One” this anthology demonstrates the potential of this killer machine ... read more