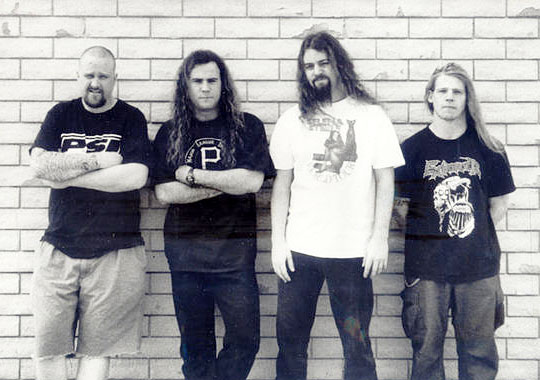 Premonition has been one of the leading forces in the nineties Texas techno thrash metal-scene. Together with techno-gods Watchtower, Arcane and few others they shred the stages in the Lone Star-state, released fantastic, original songs and had a great influence on countless followers. Unfortunately it never led to a deal, though there have been offers from worldwide operating labels. But their music is still hot and has frenetic fans all over the world until this day!

PREMONITION was originally started in Arlington, Texas by two lifelong friends Kirk Andrews and Rodney Mullins in 1987. The band then consisted of Kirk Andrews on lead guitar, Rodney Mullins on drums, Trey Williams on bass, Johnny Nuckols on guitar and Chris Ortiz on lead vocals.

Premonition's first recording called "Premonition" was released in 1989. Included on this recording were the songs "Incarnation of Death", "Self Mutilation", "So Heavenly Bound (No Earthly Good)" and "Destined Fate (Divination)". Premo received positive reviews, but after playing everywhere they could, a line up change was made replacing lead vocalist Chris Ortiz with Danny McGuire. Premonition also departed ways with guitarist Johnny Nuckols and became a four piece proggresive thrash powerhouse.

In 1993 Premonition recorded the classic "Brutal Healing"-demo, which again received praises from the Premo fans and media critics all around the world. Songs like "Brutal Healing" and "Of Spirit, Body, and Mind" made you want to tear up the room and all who was in it. And the high energy of "Unlike You" and "Induced Psychosis" left you lying on the floor out of breath. During this time another line up change was made when bassist Trey Williams left the band and was replaced by Don Vowell, formely of the band Hydra and the "Brutal Tour" commenced.

Drummer Rodney Mullins decided to leave the band in 1996 and was replaced by Phil Thomas, formely of the band Juggernaut. Shortly after this, Premo decided to change their name to "C.I.A.". And after one final recording - "CIA - Course in Anger" - in 1996 (this included the songs "A New Life","Rust", "Habbits" and a great cover of "Deuce" by Kiss) they only played a couple of shows under the name C.I.A. and disbanded in 1997 for good. This recording was never officially released.