Killer Souls is a thrash metal band from La Zona de Los Santos, San Jose, Costa Rica, founded in 2016. In 2017 they released their first EP „Revenge Of Souls“ which helped the band to gain more attention in their country and created the opportunity to play in more venues and gigs around Costa Rica. They are proud to present their new album called „Reckoning“. They hope you enjoy it as much as they do!

Costa Rica is the hot spot for Heavy Metal in Central America. Following the steps of bigger names like Chemicide, Höwler or Zyanide this young band is working hard to find their own style and to improve themselves.

While the artwork isn’t a first strike (but the debut of f.e. Flotsam & Jetsam wasn`t, too 😊 ) the riffs speak for themselves! Give them a chance!!!

In fact Killer Souls is the 3rd act from this central american country to sign to Ragnarök. And hopefully they won’t be the last one. Make sure to be among the first listeners of this hard working new act. 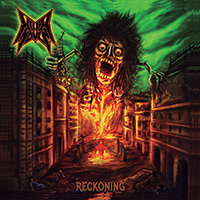