If you told me that a hole was recently torn in the space-time continuum and this newest Potential Threat SF album was warped to the present from 1990 by extraterrestrial starships, of course, I would think you were batshit loony and should probably stop watching SyFy. (Not that there’s anything wrong with watching SyFy, so long as you remember that those aren’t documentaries.)

But after I smiled and nodded and backed slowly away from you so as not to make any sudden movements, and then I went to listen to Threat To Society, I’d have to concede that you may have been on to something.
Originally formed in San Francisco back in 1986, Potential Threat didn’t cross my radar until a full two decades later, although, in my defense, that’s not surprising, given their output. They only managed a pair of demos in the golden era of thrash, and then nothing beyond 1990 until a third demo in 2002. Since then, they’ve released three full length albums, of which Threat To Society is the third and handily the best, a fun and catchy spin on classic-era Bay Area thrash, falling somewhere between Testament and Metallica. Have you heard this kind of thing before? Absolutely. Does it still hit a sweet spot for those thrashers among us? Also absolutely. There’s a reason we return to those records, and the combination of riff and rage, melody and blistering speed is damned irresistible, even with influences worn firmly on sleeves.

Vocalist Mike Noble has a biting, gravelly snarl, occasionally leaning toward Tom Araya’s bark, but mostly in that same snarly vein as Billy and Hetfield, and he and fellow guitarist Daniel Sheridan weave around each other in the same manner as Hetfield / Hammett or Peterson / Skolnick. Harmony guitars dance around in the intro to “Root Of All Evil,” with a lead guitar tone so classic-thrash that ESP probably has it patented. Those guitarmonies return in “Raise Your Fist” with some extra-bonus Burton-esque action beneath courtesy of bassist Damien Sissions, who also does time with the fellow old-schoolers in Death Angel.
So, yes, Threat To Society feels like a blast from the past, and it more or less is one. The only real difference between this Threat coming then or now is that the production values these days are a little stouter, a little punchier, and the album reflects the updated style. Still, point to the shout-along choruses to “Root Of All Evil” or “Don’t Look Back” or the melodic hook to “Spitfire,” and had this been released three decades ago, it would likely be a crate-digger’s dream find, some old burnout’s overlooked pleasure, and soon to see a deluxe reissue on a catalog label. Is it a game-changer? No, of course not — these types of things seldom are. But if a Bay Area-styled pummeling circa 1990 is your idea of good friendly violent fun, then hop in, we’re heading through this rip in the space-time continuum to the Omni in Oakland… 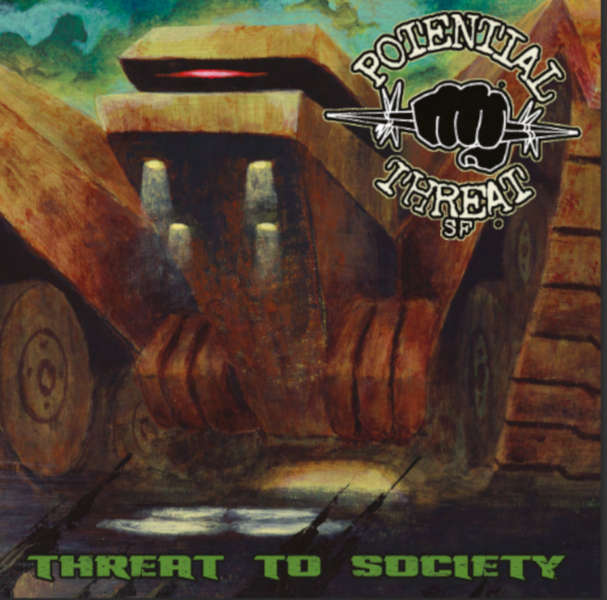